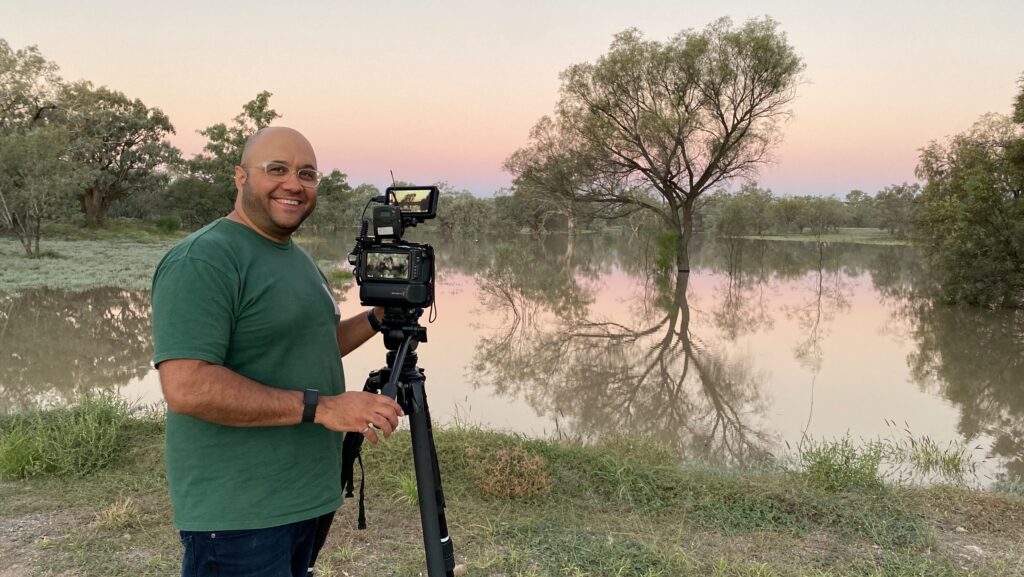 Award-winning filmmaker Daniel King has been named the inaugural recipient of the Indigenous Documentary Placement, a new initiative co-presented by the ABC, Northern Pictures and the Australian Documentary Conference (AIDC) to fast-track the careers of Indigenous nonfiction screen practitioners.

The placement will enable Daniel, a descendent of the Yuin and Awabakal nations, to develop his skills in documentary, factual development and production and foster greater diversity of voices in the Australian screen sector.

Daniel is a documentary filmmaker, cinematographer and editor who, for more than a decade, has focused on telling the stories of First Nations peoples. He directed the 2020 feature-length documentary Trading Cultures, screened on NITV/SBS, which traced the collaboration between three Indigenous Australian artists and three artists from Makassar in South Sulawesi.

He will start his eight-month placement with the ABC and Northern Pictures in late May, working across the development and production of their respective factual slates.

Daniel said: “I’m honoured and grateful to be given this opportunity to further develop my craft as a documentary filmmaker, which will enable me to tell stories that will enrich the cultural fabric of our society but more importantly better the lives of my people.”

Michael Carrington, ABC Director Entertainment & Specialist, said: “Daniel’s work in documenting the experiences of Indigenous Australians will be a welcome addition to ABC Factual & Culture, which is dedicated towards increasing the diversity of stories and voices on our screens. The ABC has a long history of supporting Indigenous creatives and content and we are proud to partner with Northern Pictures and the AIDC to help build the careers of homegrown creatives through the Indigenous Documentary Placement initiative.”

Natasha Gadd, CEO/Creative Director, AIDC, said: “AIDC is firmly committed to supporting opportunities for new voices and stories in our screen sector. We’re thrilled to co-present the Indigenous Documentary Placement with ABC and Northern Pictures, and are looking forward to tracking what Daniel will bring to the placement, as well as the new skills he will take away from the experience.”

Peter Anderson, Managing Director, Northern Pictures, said: “At Northern Pictures, we pride ourselves on collaborating with talented filmmakers, who produce original factual content which is both relevant and impactful for Australian and international audiences. Together with the ABC and AIDC, it’s with pleasure that we have the opportunity to work alongside Daniel in not only supporting our project slate but also providing him the opportunity to identify new stories to tell in unique and engaging ways.”

As part of the Indigenous Documentary Placement, Daniel will work with Northern Pictures’ Factual team from May to September on the development of their slate, as well as providing production support for current and upcoming projects and assisting the team in identifying and developing diverse on- and off-screen talent.

From September through to next January, Daniel will work with the ABC Factual & Culture team on their upcoming slate for 2022, with a focus on learning the development, commissioning and editorial production process behind the ABC’s distinctive Australian content.

Daniel holds a Master of Film and Television from the Victorian College of the Arts and an Advanced Diploma in Video Production from RMIT.