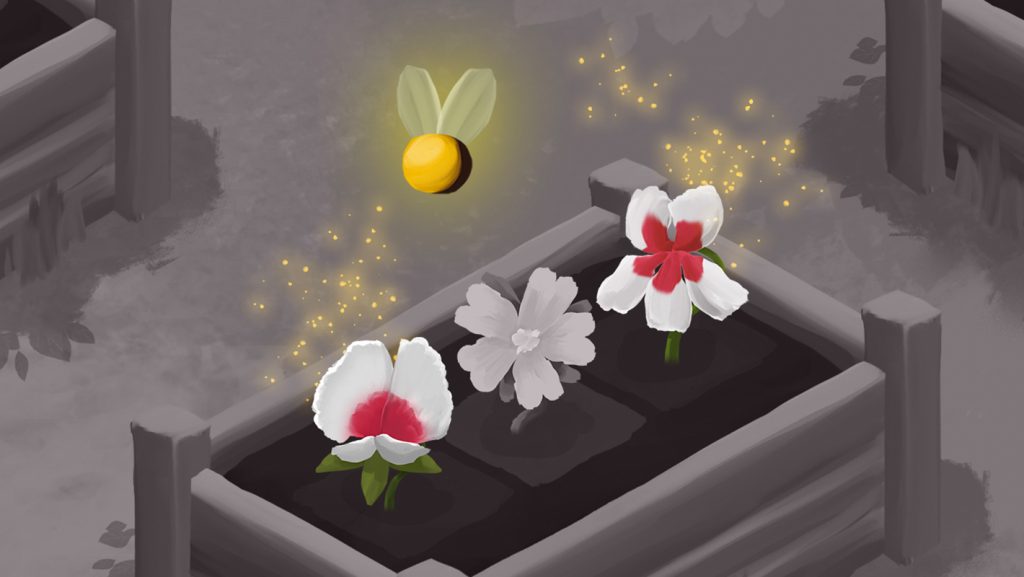 Today we bring you interviews with two of the shortlisted teams participating in State of Play at AIDC 2021. Presented by Film Victoria, this program is AIDC’s new pitching initiative designed to unleash innovative storytelling through collaboration between nonfiction stories and gaming technologies – bringing new documentary games to life.

As part of Innovation Day at AIDC 2021, four teams will pitch their playable proof of concept and compete for the grand prize of $25,000 project funding for the best non-fiction game!

BEESCAPES: THE GAME
By Alan Nguyen and Mighty Games

1. Where did the idea for your documentary game come from?

We decided to come up with a documentary game that would encourage positive action in players. The original BeeScapes VR documentary (also currently in production!) aims to create empathy for and understanding of non-human beings crucial to our systems of nature and food-production: bees. The doco offers audiences a view of the world as if they had the senses of a bee. The companion game focuses on what we, as humans, can actually do to support our threatened bee-cousins… like planting native plants and other actions.

2. What’s the most exciting aspect of collaborating with nonfiction stories and gaming technologies?

I think the great thing about games is that they are somewhat active for the participant. People often learn best when they are doing something, so we are hoping that people will learn what positive steps they can take through playing our game. Action can also spur further action. So, we are hoping that action within the game will lead to positive action outside of the game. In our game concept, there is a feature where players can share photos and videos of real-world things that they have done.

I think nonfiction media connects us with important issues that we have to face. Working with documentary material to generate fun and interactive experiences for audiences is a really exciting area to work in.

3. How is the documentary gaming scene shaping up in Victoria?

I’m genuinely excited about all of the teams and projects involved in the State of Play initiative. I think Victoria is a great place for a hybrid-form like this to be explored. We have filmmakers, artists and games developers that occupy a zone that straddles experimentation, social/environmental good and commercial considerations. We have also had some unusual games made in Victoria that have been quite successful.

4. Melbourne is home to more than half of Australia’s games devs and has the reputation of having a vibrant creative community. What makes Melbourne a great place to make games?

I’m newer to the games world (my background is in film, television and rap), so I might not be the best person to answer this! Something that is positive for all of our artistic endeavours in this city is that there is a pretty big overall celebration of arts and culture in general. I’ve always been excited by cross-pollination (bee-reference), and I hope that continues to happen more in Melbourne with arts and culture.

Melbourne has a lot of cultural diversity. Some of my awesome collaborators at Mighty Games (as well as with the original BeeScapes documentary) come from various countries around the world. I think this makes for great discussion, creativity and art.

5. What would it mean for you to win the State of Play pitch initiative?

I’d love to continue work on this project with my collaborators at Mighty Games if we can. I’m sure all of the teams have created something exciting and am looking forward to seeing what everyone has come up with! Hopefully there’s much more to come in this area.

1. Where did the idea for your documentary game come from?

When Melbourne City Council assigned ID numbers and email addresses to individual trees, they hoped people would step up and report when a tree was sick or had been vandalised. Little did they know that Melbourne’s residents would do so much more than that – they started writing heart-felt letters to their leafy neighbours. This drew our attention to people’s desire, yet inability, to connect playfully to the natural world.  The project Love Letters to Our Trees was born.

2. What’s the most exciting aspect of collaborating with nonfiction stories and gaming technologies?

Nonfiction stories are dynamic and you can come at them from multiple perspectives, just like games. The most exciting part is that, when combined, the user gets to be in the driver’s seat.

3. How is the documentary gaming scene shaping up in Victoria?

This is an emerging field which I think we will see start to explode in the next year or two – audiences are recognising that gaming is more than just car explosions and guns. It’s a great way to get audiences involved in learning and understanding through gameplay.

4. Melbourne is home to more than half of Australia’s games devs and has the reputation of having a vibrant creative community. What makes Melbourne a great place to make games?

Having so many developers and creatives in one place, combined with supportive screen agencies means the future possibilities for collaborations is exponential and exciting.

5. What would it mean for you to win the State of Play pitch initiative?

This would be an amazing springboard for our existing suite of interactive experiences designed around helping combat plant blindness. We have already produced an animated short doc, are developing a VR experience and now with this, are in the running for AR development funding. It’s all very exciting and any kind of funding helps attract other money in this emergent field.

The State of Play pitch will take place at AIDC 2021. Conference passes are on sale now.