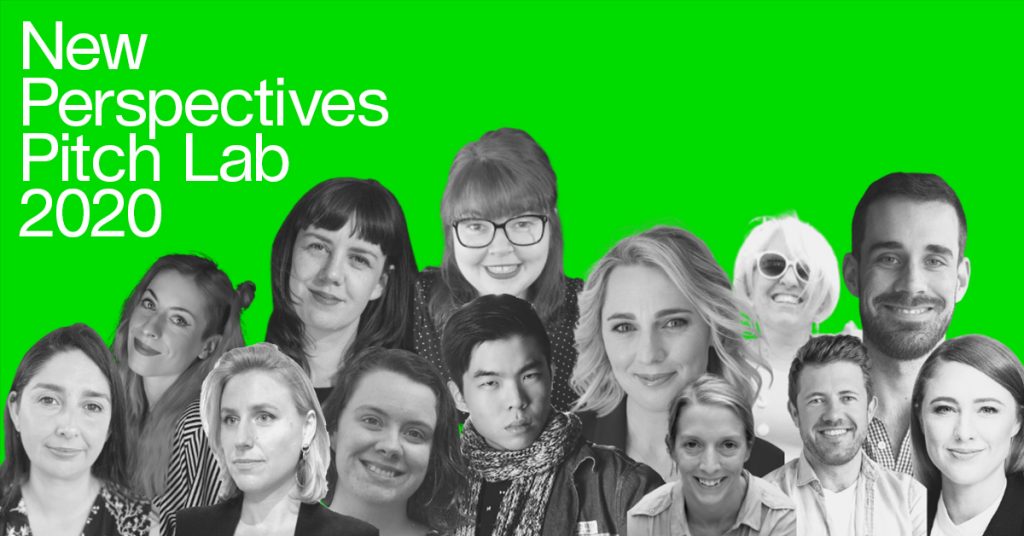 The projects and participants selected for the inaugural New Perspectives Pitch Lab, a training initiative for emerging non-fiction talent with a social impact project in development or production, have been announced today.

New Perspectives Pitch Lab is an initiative of the Australian Film Television and Radio School (AFTRS), Doc Society and the Australian International Documentary Conference (AIDC), in partnership with Screen NSW.

The Valley, a feature documentary from writer/director Josie Hess and producer/writer Stephanie Sabrinskas about a regional Victorian town that sits on the precipice of Australia’s largest coal mine. In the wake of the industrial collapse, young female activists fight to rebuild a brighter future for their communities.

Stephanie Sabrinskas is a musician, writer and all-purpose creative from the Latrobe Valley in Gippsland. In 2019, her band Rusted Tongue recorded their debut self-titled EP which Stephanie co-wrote. Rusted Tongue performed at HOBOFOPO (Hobart’s folk punk festival) and were the recipients of the Irish Mythen Bursary Grant for up and coming female musicians.

Gay Graves, by writer/researcher/host Holly Zwalf and producer Erin McBean, is a podcast series uncovering the hidden, forgotten, and never-before-told queer histories of Australia. From gay bushrangers, lesbian buskers, and techno-dancing bush hippies through to genderless Indigenous dreaming spirits and crossdressing husbands and wives, Holly Zwalf and guests visit a new gravesite in each episode to scatter eco-friendly rainbow confetti and to (re)discover the LGBTQ+ histories buried there.

Holly Zwalf has a PhD in creative writing and a background in podcasts, screenwriting, performance poetry, cabaret, stand-up comedy, and freelance writing for a variety of online magazines. She is a queer solo parent by choice who lives in the bush in regional Queensland with her wild child. In 2020 she was a Queensland state finalist for AFTRS and Screen Australia’s Talent Camp. Her documentary Tea Change was one of six projects shortlisted for OutHere, a Channel Ten and Screen Australia regional LGBTQ+ documentary initiative.

Erin McBean has worked as a writer, director and producer across documentary, advertising, podcast and film production in Europe and Australia. She has written and line-produced broadcast documentaries for ABC, SBS and Arte, among others. Since 2018, she has been developing her work as a director, including directing and producing the short documentary Mother//Lover as part of the Screen Australia Doco 180 initiative. In 2020, she produced the podcast Dangerous Women with Holly Zwalf. Erin has a number of other projects in development.

iSpeak, by producer/writer Aven Yap and sound engineer Chloe Turner (AFTRS graduate, Masters in Sound), is a podcast about how language shapes the human experience. By the end of this century, half of the world’s 7000 languages will become extinct. Which languages do we want to define our lives? Why do we speak the way we do? What will we lose when a language falls silent? iSpeak explores how we reckon with the rapidly changing ways we interact with language.

Chloe Turner is a Sydney-based sound practitioner and member of the Australian Screen Sound Guild. Her sound work in short and feature films has screened at Telluride Film Festival (2020), St Kilda Film Festival (2018) and Melbourne Women in Film Film Festival (2018), along with several others locally and internationally. Chloe has recently completed her master’s degree in screen sound at AFTRS, where she produced an original drama podcast pilot, Refuge. She has a particular interest in stories that give a voice to those who are traditionally silenced and marginalised in mainstream media.

Make It Look Real, a feature documentary by producers Bethany Bruce and Daniel Joyce and director Kate Blackmore, is about an intimacy coordinator, who is hired to choreograph Hollywood sex scenes and keep actors safe on set. She sets out to change her industry in the wake of the #MeToo movement, but begins to question whether she really is able to protect the actors she works with.

Bethany’s focus as a producer is on inclusive stories, especially those from the feminine viewpoint. Her short documentary credits include The Glass Bedroom, Video Becomes Us and the upcoming Accumulations with director Kate Blackmore for the ABC. Her drama credits include the AACTA Social Shorts-nominated Wolf and the festival favourite Broken Line North, and as executive producer on the TIFF-selected short film Birdie. Bethany was mentored by acclaimed producer Bridget Ikin (Sherpa, An Angel at My Table) during her time working on the BAFTA-nominated feature documentary Sherpa. Recently, Bethany was co-producer of feature documentary Martha: A Picture Story, which premiered at Tribeca Film Festival.

Producer Daniel Joyce is a leading Australian documentary practitioner. His most recent film, Martha: A Picture Story, premiered at Tribeca Film Festival in 2019 and is being widely released in 2020. His film Barbecue launched at SXSW before a global Netflix release in 2017. His previous documentaries have explored sites of social tension and personal ethics in projects such as Meatwork, Big Bad Love and Maddie Parry: Tough Jobs for the ABC (Australia). He has consistently worked with female creatives and helped to elevate emerging directors to their first successes. Daniel is also a sponsor of AIDC’s Leading Lights program for new filmmakers.

Director Kate Blackmore is an acclaimed artist and a filmmaker whose work focuses on the experience of women and the way society relates to the moving image. Film and television projects include: The Woman and The Car – a thirty-minute documentary commissioned by the Adelaide Film Festival; online arts series The Glass Bedroom and Video Becomes Us for the ABC; Art in Mind, which profiled international artists such as Ai Weiwei and Ryan Gander; and the Walkley Award–nominated contemporary dance series The Movement.

Norita, by producers Rebecca Bennett and Daniel Joyce and director Jayson McNamara, is a feature documentary set in Argentina. In 1977, Nora Cortiñas’ son was kidnapped by Argentina’s dictatorship. During her forty-year search for him, Nora is transformed from a conservative housewife into a trailblazing activist and celebrated icon, inspiring a new generation to fight for their democracy.

Director Jayson McNamara is a journalist and filmmaker working between Australia and Latin America. His debut film, Messenger on a White Horse, revealed the Buenos Aires Herald’s struggle for media freedom in reporting the story of the Mothers of Plaza de Mayo during Argentine dictatorship. The film screened on Nat Geo Mundo in 2018 and, in the two years since, Jayson has been more intimately documenting the life of 90-year-old Argentine activist Nora Cortiñas. The two share a friendship that stems from their initial encounters at local LGBTQ+ campaigns, which Jayson covered as a former reporter at the Buenos Aires Herald. Jayson’s feature and short film work has screened at the Full Frame, BAFICI and LASA film festivals and on French cable and Argentine public television.

Jayson is supported by producers Rebecca Bennett and Daniel Joyce. Rebecca’s most recent documentary Ghosthunter premiered at Sheffield Docfest and won the Sydney Film Festival documentary award, the AACTA Award for best editing and the AWGIE for best writing. She is passionate about telling women’s stories of struggle and change.

Emerging documentary director Clare Lewis has a background in producing art and film projects. For two decades, Clare curated independent galleries, realising ambitious projects in Sydney’s public domain and producing artists’ films. In recent years, she has pursued her passion for documentary storytelling with a focus on projects that have the potential to inspire social change. Her short documentary If the Walls Could Talk screened on ABC Open, Landline and ABC News 24. She wrote and directed There Goes Our Neighbourhood, a 57-minute documentary that screened in 2018 on ABC TV, a co-production with WildBear Entertainment and her company with Carolina Sorensen, People Productions. Clare was also producer on People Productions’ film I’m Wanita, which will be released in 2021.

Carolina Sorensen has been working in the film and television industry for fifteen years in various roles in non-scripted film and television projects, and is a founder of People Productions with Clare Lewis. In 2017, Carolina produced a short film about the iconic band Midnight Oil, directed by Paul Clarke, and is currently in production on the feature length documentary about the band, which will be distributed by Roadshow Entertainment and later screen on the ABC. In 2018, Carolina produced the 57-minute documentary for the ABC, There Goes Our Neighbourhood, about the public housing community of Waterloo trying to save their homes with art, directed by her business partner Clare Lewis, with Alan Erson as executive producer. Most recently, Carolina produced the feature film I’m Wanita, which was funded by Screen Australia, ABC and Screen NSW, and is slated to be released in Australia in 2021 by Label Distribution.

Head of Screen NSW, Grainne Brunsdon, said: “The successful teams chosen for the inaugural New Perspectives Pitch Lab initiative all demonstrate tremendous talent, distinctive and diverse storytelling styles and imagination. Screen NSW is excited to be involved in the development and mentorship of these unique and sincere stories. We look forward to seeing how the stories develop in the labs and prepare to become tools of record or to drive policy change.”

AFTRS Head of Documentary, Richard Welch, said: “For the inaugural New Perspectives Pitch Lab, AFTRS was thrilled to work alongside our industry partners Doc Society, AIDC, and Screen NSW to identify projects with new perspectives. We’re excited to support them through the labs program at AFTRS.”

The creators behind global initiatives such as Good Pitch, Climate Story Lab and the Impact Field Guide, Doc Society are dedicated to the impact of art and the art of impact. Malinda Wink, Global Director, Good Pitch, on behalf of Doc Society, said: “I’m looking forward to diving into these six projects covering a diversity of formats, subjects and storytellers from across Australia. Each project has great potential for impact and reaching audiences both here and abroad.”

“AIDC wishes to congratulate all the successful candidates. We cannot wait to see the final pitches and welcome one team to our 2021 event.”

The New Perspectives Pitch Lab encouraged applications from storytellers with projects that offer a rare insight into the under-represented and overlooked; stories from those who see more than what’s shown in the common zeitgeist; stories that break barriers and explore nuance over polarity.  The initiative was open to projects from across the non-fiction landscape – from observational, character-driven stories, to hybrid and essay films, to podcasts and series for television or online.

The Pitch Lab consists of five online coaching and development sessions and an online pitch event with mentors including Malinda Wink, Global Director of Good Pitch, Doc Society, and Screen NSW Investment Manager Andrea Ulbrick. The sessions begin this week. Participants develop their project pitch in group and individual sessions and pitch to an industry panel for feedback. The focus on the pitch training is to support participants to develop strategies and pathways for non-traditional access to audience and finance for projects that have potential for an impact campaign. Individuals or teams of two can participate in the pitch lab.