Debra Zimmerman | AIDC
Back to Speakers

Debra Zimmerman is the Executive Director of Women Make Movies, a NY non-profit social enterprise that has been supporting women filmmakers with distribution and production assistance of their independent films since 1972. 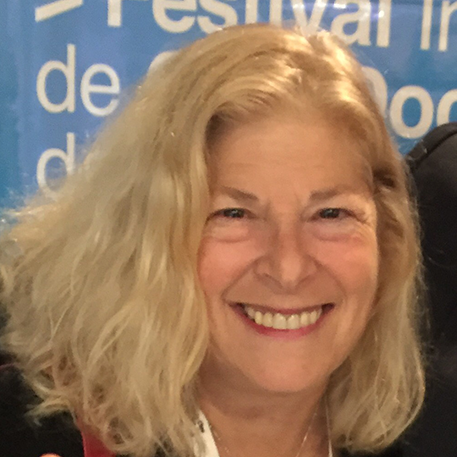 During her 35 year tenure, it has grown into the largest distributor of films by and about women in the world. For 16 years films and filmmakers from WMM’s programs have won or been nominated for Academy Awards, including Citizen Four, Saving Face, Strong Island and this year’s Free Solo. Zimmerman Is in Great Demand Around the World as A Speaker, Panelist and Mentor and Is Considered an Expert in Documentary Film Financing and Marketing. She Has Been on The Juries of Films Festivals Around the World Including IDFA, the International Documentary Film Festival of Amsterdam, the Abu Dhabi Film Festival and the Cartagena International Film Festival. She recently gave workshops and mentored filmmakers at Doc Lab in Krakow, E-Docs in Ecuador, and Docs Lisboa in Portugal. She is the author of “Film as Activism” chapter in the Routledge Companion to Cinema and Gender textbook and has taught at Rutgers University. She is the recipient of numerous awards, including NY Women in Film and Television’s Changemaker Award and Hot Doc’s Doc Mogul Award, given to those who have made an essential contribution to the creative vitality of the documentary industry, both in his or her home country and abroad.

For more than 45 years, Women Make Movies has transformed the landscape of filmmaking for diverse women directors and producers, helping to bring issues facing women around the world to light. Our unique Production Assistance Program assists filmmakers with their productions from concept through completion with fiscal sponsorship, consultations and other technical assistance. We work with creative, ground-breaking films which win awards at festivals around the world. Films and filmmakers we have supported have been nominated for or won Academy® Awards for the past 13 years. Additionally, as the world’s leading distributor of independent films by and about women, we amplify the voices of people historically ignored by the mainstream media. Our acclaimed collection, which features Academy, Emmy, Peabody and Sundance nominees and award winners, is used by thousands of cultural, educational and community organizations across North America., WMM helps fill the pipeline of rising filmmakers and reinforce the work of diverse, established women filmmakers who are paving the way for future generations.

CURRENTLY LOOKING FOR: Films about women